With our process control systems Plant iT and brewmaxx we control the production processes of renowned international manufacturers. Discover a small collection of companies we have already realized successful projects with, sorted by industry and region. 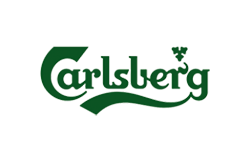 The Carlsberg brewery in Fredericia is one of the largest European breweries with an annual output of roughly 4.3 m hl. More than 40 beer types and no less than 20 mixed products make Fredericia the most important brewery location for Carlsberg in Denmark. It was therefore essential to complete the changeover to the new control system with the least amount of production downtime, also because of this plant produces 65 % of the beer consumed in Denmark – which corresponds to over 4 million hectolitres or approximately 1.2 billion bottles per year. The individual process areas were implemented one after the other in record time, and were put into operation as planned with only a few brief interruptions. The first project phase involved the re-organisation of the whole cellar, consisting of four fermenting cellars with 54 fermenting tanks and two filtering lines with 40 downstream pressure tanks and several tanker stations. brewmaxx was implemented for this entire cold block in one large step. Wort preparation was adapted to brewmaxx during the second project phase. The brewhouse was actually out of service for just six days.